Day 11, The countdown officially started💃🏿. It was a Sunday so there were no early morning parade or drills because of Church service. I had enough time to rest which I took advantage of then the usual afternoon drills match practice, then there was social night in the evening.

Day 12 started with morning assembly but this time there were no morning drills instead it was a morning lecture and we learnt a language, Hausa to be specific, it was very fun and interactive, the most interesting lecture we have had so far. I really love the language. The practical aspect of the SAED continued. I got my bicycle and transport allowance, they were my first money from the government 😂 then later in the evening the usual drills/ social night.

, we had our marching practice, athlete competition, which I participated in, later in the day practical photography class continued, the drills/ parade then social night.

Day 14, Exactly a week to the end, we had the usual morning drills, then practice for the inter platoon parade competition, I was pulled from the middle to the forefront to be a sub guard commander, the main marching was giving me headache and now I was to be a sub commander, Haq Haq Haq, “why me”,

it was a mess.

Day 15, The usuals, then practice for the final parade, I messed it up as sub guard commander because I still didn’t know what to do, my platoon commander assured me I’ll get it with time but that wasn’t the issue, it was just a few days to the final parade, how ??

Day 16, Preparation for our final parade competition which was in the morning, lectures also ended, last day of the practical aspect of the SAED. Later in the evening, we had Miss Nysc and Mr. Macho competition, I was interested more in the Mr. Macho competition because why not, 😂the oil that they rubbed on their bodies, their chest, their muscles😍. For the Miss NYSC/ Mr. Macho after we made them learn all the current affairs questions we thought they’d ask, they were not asked any questions. For Mr. Macho, my platoon came 4th, the guy that won though, oh my Jizzzesss

Day 17 It was our carnival

and it was amazing, the different costumes and attires from different platoons the effort that was made, it was really colourful, different tribes and cultures, we were to come out to dance according to our platoons, we came 4th in this, apparently the more costumes you wear the more your chances of winning, later in the evening we had our cooking competition, we weren’t among the top 3 I was still proud of us🙂

Day 18 The best day in Camp, it was Sunday and it was the last Sunday, there was no morning assembly or drills, there was enough time to sleep and wash, later in the afternoon we had our athletics, volleyball and football competition, My platoon won the football and the girls won the athletics competition and we came second in the volleyball competition. Later on, we had the social nights

Day 19 Morning assembly and practice for the parade competition, we had our exhibition for the various SAED professions which was turned into a competition. Finally, I got my alllllaaaawwwweeeee the joy and happiness was different from different angles,

we kept our waist purses closely to avoid “stories that touch”, some of us went to put it in our banks. In the evening we had our inter platoon drills competition, which was honestly cruise but we did our best.

Day 20, the last full day in camp and also the last day for early morning drill unlike the usual morning assembly we had this one in the hall, the cold wasn’t too much and we sat down so it was comfortable, later in the morning we were taught how to to use a fire extinguisher, the final practice for our passing out ceremony, at this point, all the marching was already exhausting for me, it was too late for me to stop. In the evening it was parte after parte.

Day 21, The last day in camp!!! Woke up earlier to get all my things ready to be put in the church for safety, then later to prepare for the closing ceremony. We had our closing ceremony and when it was over, taking of pictures after that PPA (place of primary assignment) letters were already out. It was the end.

SideStory – My name was a bit hard for them to call so I was called Eyi or Chocolate, mostly chocolate. We had the Orientation Broadcasting Service (OBS) a radio, it was just cruise 😂 sending shout outs to your camp crush, some of the shout outs that were read during social night sounded like proposals 😂 there were also shout outs done to family, friends and loved ones at home or abroad by calling them which was done during the break. The camp was never boring there were always activities going on and when there was a break we had music from the OBS. Charging phone was a bit of a struggle cause there were no sockets in the rooms, but then there were different spots at mami where they charge phones and power banks, it wasn’t free (mami is a market) where they sell all sorts, like food, clothes, shoes, they make hair, barb hair, literally almost everything you’d need.

Sundays were my favourite time in camp there was enough time for everything, sleep, wash…

Our punishments were usually to sit on the floor cause the floor was so dusty, sometimes it was a relief for me from all the standing, it’s just the washing of the whites I didn’t look forward to.

There’s really nothing you cannot make money from, for the cold they sold hot water, the people that sold hot water, were the ones that made the most money from camp, Kaduna’s cold isn’t anybody’s mate, the people there kept saying it hadn’t even started yet😂 the only consolation is, it’s preparing me for “the abroad” so Canada we move 💃🏿. Hot coffee was also sold early in the morning and late at night.

Most times we are so used to our comfort zone we don’t want a change, (if this isn’t me)I have been in Ibadan all my life, but then you only live life once, you should travel, explore, meet new people and make memories (so you’ll have stories to tell) Btw I travelled alone for the very first time, 13 hours journey from home 😂

My stay in Kaduna was an incredible experience, one of the best experiences for me this year, I made new friends, met new people, learnt a new language, Hausa language ( the basic), different taste in food, Kaduna brought that change for me. Their customer service is amazing they’ll make you want to spend all your money, always happy, laughing and smiling ( I found my people). Thank you Black Gold Camp, Thank you Kaduna, this experience is one I’ll cherish forever.

The best moments were the ones I don’t have a picture or a video of, it’s just in my head, I met an amazing girl( Dorothy) sadly there are no pictures of me with her but she’s etched in my memory forever❤️, however thankfully there are some pictures and videos from camp on my Instagram highlight, you should check it out😁

P.s you’d have to increase the brightness of your phone to see some of the pictures and videos.

If you read up to this point Nagode 🙏🏾 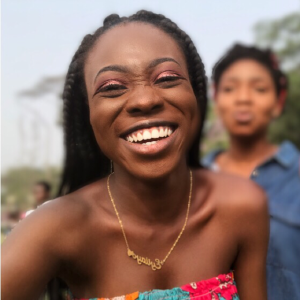